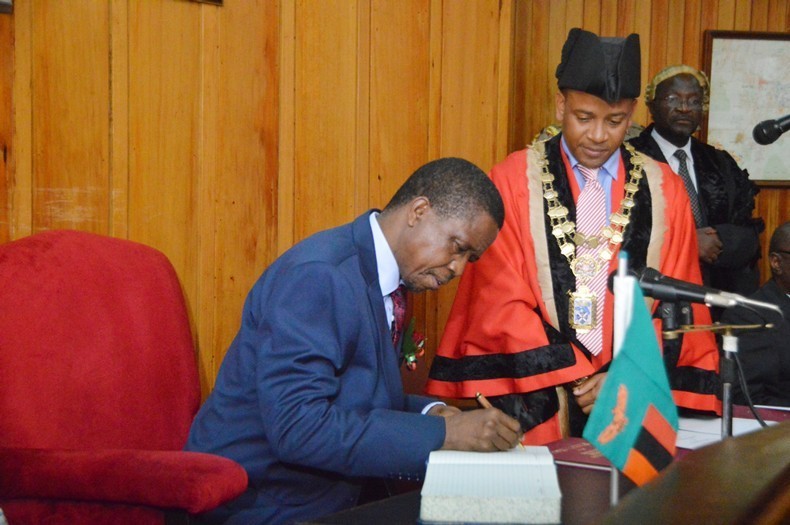 BLANTYRE: At least, this year’s independence anniversary celebrations left a mark in Blantyre City as it hosted the Zambian president Edgar Chagwa Lungu.

It was on July 5, 2015 when Blantyre City Mayor Noel Chalamanda officially granted Lungu Freedom of the City on his maiden visit to Malawi since his ascendancy to the high office of the State President.

Immediately he landed at Chileka International Airport, Lungu, wearing a navy blue suit flanked by his wife Esther, was driven straight to Civic Offices around 18:30 hours for the honours.

Lungu was in Malawi on President Professor Arthur Peter Mutharika’s invitation to grace the Country on 5th July to attend the Independence Celebrations.

Chalamanda said granting Freedom of the City is a traditional means for a municipality to honour visiting distinguished guests.

Said Chalamanda; “The decision to grant this freedom rests with the municipal authorities and it remains the oldest and one of the highest civic honours in the Commonwealth of nations.”

He said it is an example of a military tradition initiated in England during the 15th Century.

During the War of the Roses, cities were constantly endangered by marauding military units from one side or the other. Before a city would admit a military unit inside its walls, the Chief Constable demanded to know the purpose of the soldiers’ entry and escorted their commander to the Council Chambers.

If the leaders felt the unit could be trusted, it was granted privilege known as “Freedom of the City,” which entitled the unit to enter the city with drums beating, banners flying, and bayonets fixed.

The Mayor commended Lungu’s visit to Malawi and Blantyre in particular which he said cemented the relationship that is there between Blantyre City and Ndola City of Zambia which are both commercial Cities of the two countries.

He said: “We are like brothers because we share so much in common including our food, religions, traditions, languages and many more. We are the same. This is why for a long time, we have co-existed and mingled without any problems.”

“Malawians and Zambians are but one people separated by the imaginary lines that are found in Atlases and geography books but never on the actual ground,” he said.

Chalamanda presented the Zambia President with a freedom key as a symbol the Lungu had the Freedom of the City and could visit any place of his choice.

After signing the visitors’ book, Lungu said it was a great honour to be granted the Freedom of the City.

He pledged to ensure that the relationship that exists between Ndola and Blantyre cities are more meaningful.

Malawi and Zambia both attained Independence in 1964.